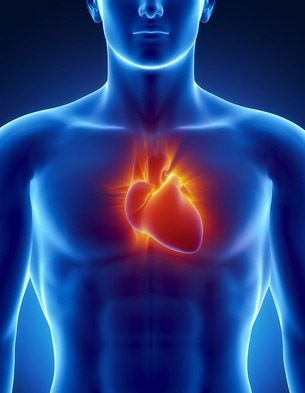 That’s what the headline read. But, I wonder. Did his heart attack really happen with no warning signs, as the word “sudden” would seem to indicate? Only about 25% do. The other 75% have warning signs days, weeks — even months — before they happen. Or, did the author’s father ignore his warning signs because they would come and go?

I nearly did because my symptoms were so mild!

Late in 2014, I finally decided one morning to follow my doctors’ recommendations — insistence, really! — that I start exercising again.

But this time, I also developed mild nausea. Just to be on the safe side, I went into the bathroom. My stomach convulsed twice, just like it would if I were throwing up. But, nothing came up — I had a case of the dry heaves that, as quickly as they happened, went away.

I didn’t think about it any more because I’d had the same mild chest pain before, along with being a little short of breath. Both would go away quickly if I simply sat down or stood still for a few minutes. After all, this had been going on for around 6 months without getting any worse. And, it felt a lot like heartburn.

Later that day, I had an appointment with one of my doctors and described what had happened. He immediately stopped what he was doing and said, “As soon as this appointment is over, I want you to drive straight to your cardiologist’s office and tell him what happened.”

I did, even though I didn’t have an appointment. That was Tuesday. I had an electrocardiogram that day. On Thursday, I had a nuclear stress test. On Friday, I had an echocardiogram. And, on Monday, I was in the hospital’s cath lab with three blocked arteries, each of which required balloon angioplasty. I also had two metal stents implanted to keep the largest of the arteries from becoming blocked again.

Before the procedure, my heart had become a ticking time bomb, probably only weeks or a few months before having a major heart attack. I was lucky to have a physician who, a week earlier, listened to me when I described my symptoms, and pushed me to have my heart checked out.

As I was being discharged the following morning, I had a long talk with my cardiologist. Among other things, I learned that the increasing fatigue and brain fog I had been feeling for the past six months were also caused by the blocked arteries. My problem wasn’t with cholesterol; but I have had a problem with my triglyceride levels for decades. (I also had family history — my mother had a heart attack at the same age.)

I haven’t had any chest pain, fatigue or brain fog since I had my heart procedure. All of my symptoms disappeared as soon as the procedure was over. My recovery? Fast. I wasn’t supposed to lift anything heavier than five pounds for a week. Other than that, I could do anything that I used to do, including sex.

Even though the symptoms I felt were angina, they were very mild and very easy to ignore. (My mother’s only symptom was nausea that wouldn’t go away.) In 2008, my wife’s angina progressed over time into severe jaw and arm pain, lightheadedness and nausea, and a feeling that her legs were made of concrete — heavy and difficult to move. (She also had a stent implanted.)

Angina is usually pain in the chest and surrounding areas of the body that occurs when your heart does not get enough oxygen because the blood vessels that carry oxygen to the heart muscle are clogged. It is a warning sign of coronary artery disease. The earlier angina is diagnosed and treated, the better your chances of recovery. If not treated, angina will gradually become more and more painful, and ultimately lead to a heart attack.

What’s the difference between a heart attack and angina?

A heart attack causes part of your heart muscle to die within 20 minutes; that part cannot grow back or be repaired. With angina, even intense angina, your heart muscles have not been damaged — yet! However, left untreated, the conditions that cause angina will ultimately cause a heart attack. Angina does not get better by itself! People don’t die from angina. BUT, 1 in 4 people who have heart attacks die as a result!

What are the symptoms of angina?

The symptoms are the same as a heart attack, only less severe, and they last for only a few minutes. The pain and discomfort felt during an angina attack is an early warning of an impending heart attack. The symptoms of angina vary significantly from person to person. Most people will usually have one or more of the following symptoms:

If you have any of these symptoms and they go away after a few minutes of rest, get your heart checked out by a cardiologist at the earliest possible date. Don’t delay. Remember, an angina attack is an early warning of an impending heart attack.

What are the symptoms of a heart attack?

The symptoms of a heart attack are very similar to those of angina, with 3 main differences.

Chest discomfort. For both men and women, the classic signs and symptoms of a heart attack usually involve discomfort in the center of the chest lasting more than a few minutes, or that goes away and comes back. The pain can be stabbing or crushing, or feel like uncomfortable pressure, squeezing, fullness or a burning pain.

Discomfort in other areas of the upper body. Other heart attack signs and symptoms men and women experience include squeezing pain in the chest or left upper arm that radiates to one or both arms, the back, shoulders, neck, jaw or stomach.

Other heart attack signs and symptoms that can occur without chest pain. Breaking out in a cold sweat for no apparent reason, severe indigestion, nausea, vomiting, light-headedness, dizziness, weakness, extreme fatigue, fainting, heart palpitations (pounding heartbeats), or a sensation of panic with a feeling of impending doom.

Are the symptoms different for women?

Some women report symptoms that are different than men report. For women, they usually involve chest pain. But, women may also experience any of the other problems described above, especially nausea, shortness of breath or pain in the arm, shoulder or neck.

Bottom Line: The image that’s often portrayed in movies and on TV of someone having a heart attack — a middle aged man with crushing chest pain suddenly falling to the floor — doesn’t always happen in real life.

If you have any of the symptoms of a heart attack

Very Important: You are better off taking an ambulance than driving to the hospital, because emergency workers can start treatment and transmit your ECG en-route to the hospital.

One of the reasons that heart attacks are so deadly is that people are too slow to seek help when symptoms arise. Don’t ignore possible warning signs. Don’t wait to see if they go away, or be quick to blame them on heartburn, a pulled muscle or tiredness. That’s especially true for people who already have coronary heart disease risk factors, such as high cholesterol, high blood pressure, obesity, smoking, diabetes or a family history of heart disease.

Remember: Nearly half (47%) of all heart attack deaths occur outside a hospital.

I know. It’s embarrassing to make a fuss if it turns out to be a false alarm. But, this is the worst attitude to have with a possible heart attack. Speed is vital. If you think you’re having a heart attack, call 911. The faster you get treatment the better your chance of survival.

Don’t Wait until You have a Heart Attack
Choose Life! — Don’t be Another Statistic!

Mike is a former family caregiver with a passion for improving the Quality of Life for Older Adults and Family Caregivers.

You said lightheadedness was a symptom of a heart attack. It would be a good idea to get this checked out as soon as you have this symptom. My husband has a history of heart disease, so I will let him know this.

A Place for Mom Can Help You Find Senior Care

We have partnered with A Place for Mom to provide a free referral service that helps you find everything from Home Care and Adult Day Care to Assisted Living, Alzheimer’s Care and Nursing Homes. Let A Place for Mom help you online or call them toll-free (877) 311-6092. (A Place for Mom is paid by their participating senior care providers and facilities.)